The Wonders of Wooden Bead Mazes

We must admit that we have not really been intentional in buying educational toys for Atticus during his first 12 months. He had about 3 rattles and a couple of plush toys (which were all gifts) and that’s it. We noticed that he would prefer the crunchy sounds of paper or plastic bags over his actual toys.

When he turned one, he had those battery-operated toys that help babies learn about letters or colors. Some would emit different lights accompanied by catchy lullabies or nursery rhymes and jingles. He would play with it for about five minutes and then move on to another toy. It was only when we discovered the wooden bead mazes from Hape that we realized that Atticus would actually play with the same toy for more than 15 minutes. 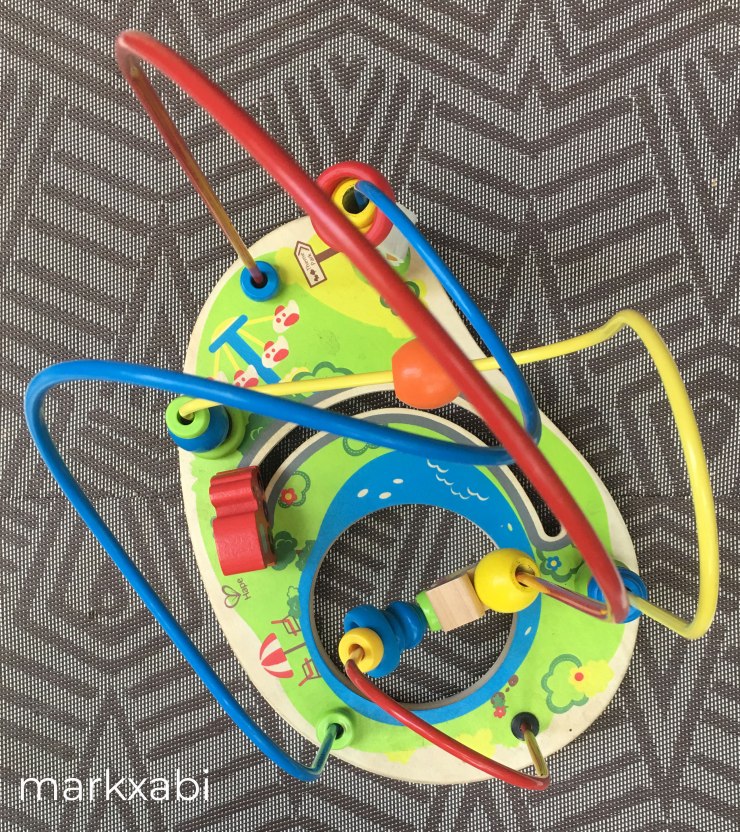 Wooden bead mazes usually have a solid and wide wooden base. Connected to the base are wooden beads that are loosely attached to wires that form a maze.

In this age of electronic toys and gadgets, wooden bead mazes have never lost its magic among kids and are loaded with the following awesome features:

Since the beads are securely placed in the metal wires, parents need not worry about choking hazards.

I have observed that whenever Atticus plays with the bead mazes, he always looks at his hands when he guides the beads along the wire. Through this activity, he coordinates his eye movement with his hand movement by reaching and grasping the beads.

Atticus can see the change in the position of the beads when he maneuvers them from one side to the other side of the wire. When the beads get stuck sometimes along a curved wire, I can see the frustration in his face as he tries to push the beads through the maze.

The beads have different colors, shapes and sizes. This helps Atticus in comparing and contrasting.

Wooden toys are durable and can be passed on to the next generations. They are also eco-friendly and don’t need batteries to operate

Wooden bead mazes from Hape Toys come in different sizes and themes. In the Philippines, you can visit any Rustan’s Department Store ánd selected All Toys and Toys R Us Outlets for their wide array of toys.

4 replies on “The Wonders of Wooden Bead Mazes”

We are Mark and Abi, parents of Atticus, also known as Tikoy. Join us as we share our adventures and misadventures as a millennial couple and first-time parents. We hope that we will be helpful in some ways and spark good conversations.